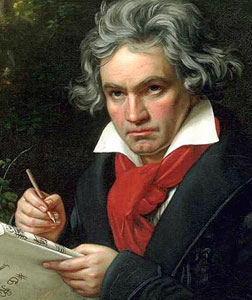 In 1779, a composer, writer, teacher, and dreamer named Christian Neefe arrived in Bonn, Germany, to work for the Electoral Court. Neefe (pronounced nay-fuh) was the definition of what Germans call a Schwärmer, a person swarming with rapturous enthusiasms. In particular, he was inflamed with visions of endless human potentials that the Scientific Revolution and the Enlightenment promised to unleash. Like many progressives of the time, Neefe believed that humanity was finally coming of age. So he had picked the right place to get a job. Bonn was one of the most cultured and enlightened cities in Germany; the court supported a splendid musical and theatrical establishment. Before long in his new post, Neefe found himself mentoring a genius. Meanwhile, in his spare time, he signed on with a plan to, as it were, rule the world.


One of Neefe's first students was a sullen, grubby, taciturn 10-year-old keyboard player named Ludwig van Beethoven. He was the son of an alcoholic singer who had more or less beat music into him. The kid seemed more like a charity case than a budding musician, but Neefe soon discovered that his talent could put him in the league of the musical phenomenon of the age, a child of freakish gifts named Mozart.

Ludwig was named for his grandfather, who had been Kapellmeister, head of the court musical establishment. Old Ludwig's son, Johann van Beethoven, was a tenor in the choir; when his father died, he had made a bid to become Kapellmeister. Everybody but Johann understood that was ludicrous: He was a competent singer and music teacher, otherwise hopelessly mediocre and a devotee of the bottle. As often happens, the full ferocity of the father's blighted ambition landed on the son. Johann van Beethoven intended to make his oldest child into another Mozart, or else.