The witness, YouTube user Naktis Ireland, uploaded the video to the video sharing service on March 16, 2013. But the title of the video indicates the incident occurred in December 2012. The video shows multiple bright balls of light appearing out of nowhere, and drifting slowly through the sky. The low-quality video is extremely jittery, but the witness explains:

I am sorry for the quality, it was filmed with a mobile phone. Ironically I had a Cannon EOS 500D with 300mm lens at home that﻿ could of filmed in 3000×3000 but I was afraid that they would disappear by the time I got my camera as this is a very rare opportunity so instead, used a phone to record as much as possible.

Fireball UFOs over Ireland. (Credit: Naktis Ireland/YouTube)
The video initially utilized YouTube’s stabilization feature to help steady the shaky video. But in response to requests by viewers who wanted to see the unmodified video, the uploader removed the stabilization. Viewers also questioned the video’s lack of an audio track. The witness responded, “The only pc software modification I did was to remove the sound as some comments where irrelevant and to cut off the end as it was filming the empty sky.” Still, there are many who suspect that elements like the shaky, poor quality of the video and the lack of an audio track are red flags indicating a hoaxed video.

Author Whitley Strieber and his wife Anne Strieber posted an article about this video to their site on Wednesday, April 17 in which they published opinions from three experts regarding the video. Anne explains: 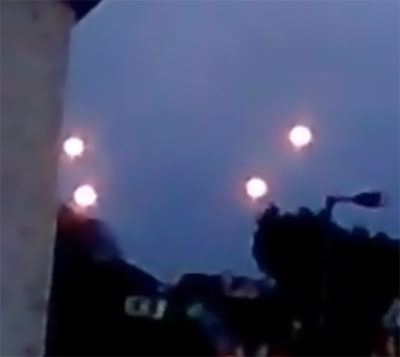 Two of our experts don’t rule out the possibility that these lights are unknowns. The third feels sure the video is a hoax. I think that this could have been made by releasing sky lanterns, then opening the shutter of the camera to make them appear extremely bright. However, there is no way to make a final determination with this video. Possible unknown.

The witness cautiously stated, “I never mentioned aliens. I said they are very bright, strange orbs that are UNIDENTIFIED witch means that I cant even say that they where lanterns because no such detail was﻿ seen. Believe what you want to believe, anything is possible.”
Satan