» Tales of Demons And Gods 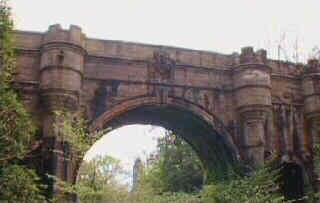 Overtoun Bridge near Dumbarton in west Scotland is the location for a mystery. Since the 1950's, it has been the scene of at least fifty, unexplained, dog deaths, which have horrified local dog owners.
Most of the dogs were long-nosed breeds; Labradors, Collies and Retrievers. Dog deaths have occurred in every season, but notably, on clear days, a rarity in this grey, wet part of Scotland. All of the dogs leapt from the same side of the bridge
According to legend, this is a place of dark deeds, tragedy and superstition. On one occasion, a man, behaving very erratically, threw his young baby from the bridge, believing it to be possessed by the devil.
In recent years the number of deaths has risen dramatically, with five animals jumping in six months. The story continues to attract widespread media attention, giving rise to the theory that these dogs could be committing suicide.
Overtoun House and it's grounds have garnered a reputation as a centre for unexplained phenomena. In Celtic mythology, Overtoun is known as a "thin" place. A place where Heaven and Earth are reputed to be close. Some have speculated that sensitive dogs are being spooked by something at the bridge. 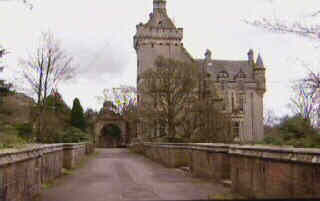 The long leap from the bridge onto the waterfalls of the Overtoun Estate almost always results in immediate death. Inexplicably, some dogs have actually survived, recuperated, and then returned to the site to jump again. The dogs have mostly jumped from one side of the bridge, during clear weather.

The phenomenon has received international attention, and the Scottish Society for the Prevention of Cruelty to Animals has sent representatives to investigate. No abnormality or explanation has yet been found.
Many people believe theories such as the winds coming from Loch Lomond or a ghost, perhaps that of a lady who resided in the area, influence the dogs to jump off the bridge. Others suggest the bridge's architecture as the cause.

Paranormal experts have traveled to the site to conduct investigations, and have not found anything unusual.
All that said however, the most likely explanation now seems to be that the scent of mink which are bred nearby, combined with the high, solid walls of the bridge makes the dogs jump, as they are completely unaware there is a 50 foot drop on the other side. Whoever said curiosity killed the cat clearly never met the dogs of Overtoun...